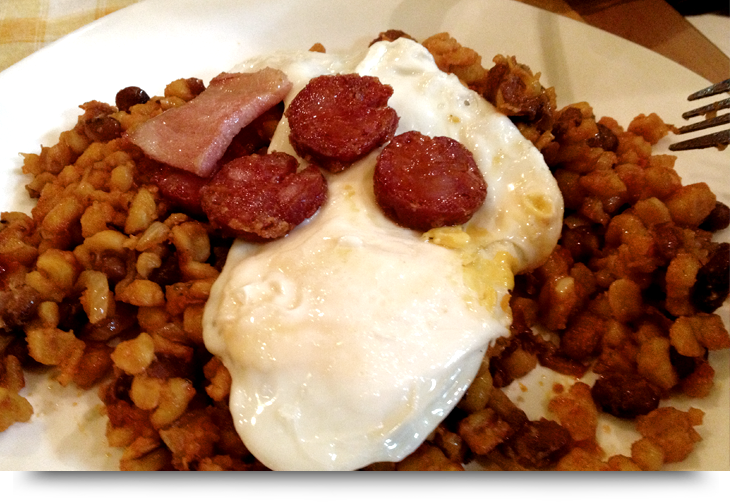 The only fresh meat you can find in Cape Verde islands is fish (meat must be imported and is therefore frozen). Almost all restaurants in Cape Verde serves fresh fish, seafood and often offer “fish of the day” at about 10 euros. Chicken is also common. The dishes in restaurants are usually simple and straight forward. Prices in Cape Verde / Sal restaurants can vary a lot, specially in Santa Maria town and Sal Rei. The restaurants towards tourists in central Santa Maria has a price range of about 7-20 euros for a main course, the same goes for Boa Vista and Sal Rei. If you would like to eat for less, look for smaller restaurants filled with locals, away from the center. It is not unusual to get the same amount of food at only 3-6 euros. Try “cachupa”, Cape Verde signature dish and former “slave food” (see image above). Tip is not expected in Cape Verde islands or Sal, but much appreciated.

Almost everything in Cape Verde is imported and some specific items are very expensive. A Magnum ice cream cost 3 euros and the cheapest shampoo is about 4 euros in Cape Verde Islands and Sal. There are no fresh food counters or delis in Cape Verde Supermarkets. All the meat and chicken is frozen (fresh fish is bought at the dock). The range of products in Cape Verde supermarkets is very limited and sometimes of bad quality. If you are sensitive and need certain foods, bring them yourself. The shelves in supermarkets can be half empty and items sometimes run out for days or weeks. You can also find homemade stuff in small bags, such as cookies or cakes, this goes even in the regular supermarkets. The vegetables and fruits in Cape Verde supermarkets are often in poor condition than what you might be used to. This is reality in Cape Verde islands, but can be chocking for wealthy visitors & tourists. There is food, just not as much as you may be used to. A hotel with breakfast included might be a god idea traveling to Cape Verde islands or Sal, specially if you are unfamiliar to these conditions.

The tap water in Cape Verde

Locals in Cape Verde and Sal drink the tap water but it is recommended to buy bottled water as a visitor or tourist.

The tourist stomach issues is less of a problem in Cape Verde islands compared to the mainland of west Africa. Simply wash your hands often, be smart in the choice of foods and you will be fine. Laminated or packaged food is ok, and also fruits with peel such as oranges or bananas. Avoid salad and open packages that are not fresh from the fridge. Always buy bottled water in Cape Verde. Bring some stomach medicine just in case.